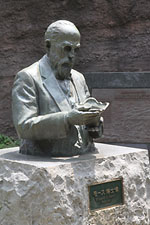 Bust of Dr. Morse at the Omori Shell Mounds Park.

The irrepressible Dr. Edward Sylvester Morse was an assistant at the Essex Institute, now the Peabody Essex Museum, when he opened “a small seaside laboratory” in Enoshima in 1877 for exploration on brachiopods when apocryphally from the train to the capitol, his keen eye detected some shell heaps amid the prehistoric kitchen middens. His discovery and excavations of the Omori shell mound in what is now Ota, was the birth of Japanese archeology and anthropology. He was appointed the first Professor of Zoology at the Tokyo Imperial University and wrote prolifically on Japanese culture and customs as well as on varied fields of scientific interest. He was elected President of the American Association for the Advancement of Science at only forty-eight and his collection of artifacts is kept at the Peabody Museum of Archeology and Ethnology at Harvard University. From Dr. Dall’s eulogy, 1925; “The salient characteristics of Professor Morse, apart from his devotion to science and love of the beautiful in art, was his boyish enthusiasm which captivated all who knew him. The versatility of his interest was unbounded, his love of fun overflowed at every opportunity; to meet him was to find a welcome. The world was brighter for his presence.” He is buried in Harmony Grove cemetery.

As part of his work Dr. Samuel Morse collected 2,500 books and pamphlets for the Imperial University Library. This is a practice that we continue; on all our trips to Japan, each student and adult donates a book in English to Haneda Library. As part of their devotion to him, our visiting Japanese guests always lay a wreath on his grave.
(Biographical information from: https://depts.washington.edu/fhl/morse/pdf/naos_morse_bio.pdf )

In 1991, The City of Salem, Massachusetts and Ota City, Japan established a sister city relationship which has been active through contact between museums in each city and between city officials.

In addition, in the 1990’s there began a cultural exchange between  teachers, students and adult residents of each city with trips to each city focused on fostering understanding between two very different cultures and developing personal relationships.

At the tenth anniversary of the sister city relationship, an organization, the Salem-Ota Club, Inc. was established by private citizens involved in past exchanges to ensure that the programs would continue at a time when traditional financial support was no longer available through the City of Salem.

The activities of the Salem-Ota Club, Inc are to raise funding and awareness to support annual trips by Japanese students and adults to Salem and conversely by Salem students and adults to Ota City. The support takes the form of establishing a network of Salem Families to open their homes to the Japanese visitors for periods of 3 days (adult visitors) to 10 days (student visitors). Additionally, fund raising supports social events welcoming the visitors with dinners, as well as transportation and entry costs to local historical, educational and entertainment venues. The funds raised also help to provide gifts to visitors to Salem and to families in Japan that  open their homes and hearts to Salem visitors. The Salem-Ota Club, Inc. also provides one scholarship each year to a high school student that has participated in programs of the organization either through a trip to Japan or as part of the Home stay Program in Salem. Specifically, the fundraising takes the form of “member” donations ( although these contributions carry no financial benefit to the donor); an annual traditional Japanese tea party; and dinners that covers costs as well extra to cover other financial needs. We also hope in the future to identify additional sources like corporate donations or grants to help with the financial needs of the organization.

In 2011, the organization adopted the dba of “The Salem Ota Cultural Exchange”.

Some additional information about our connection can be found from the Peabody Essex Museum: Sister Cities (December 16, 2014)

Letter: A mystery atop the hill (The Salem News)